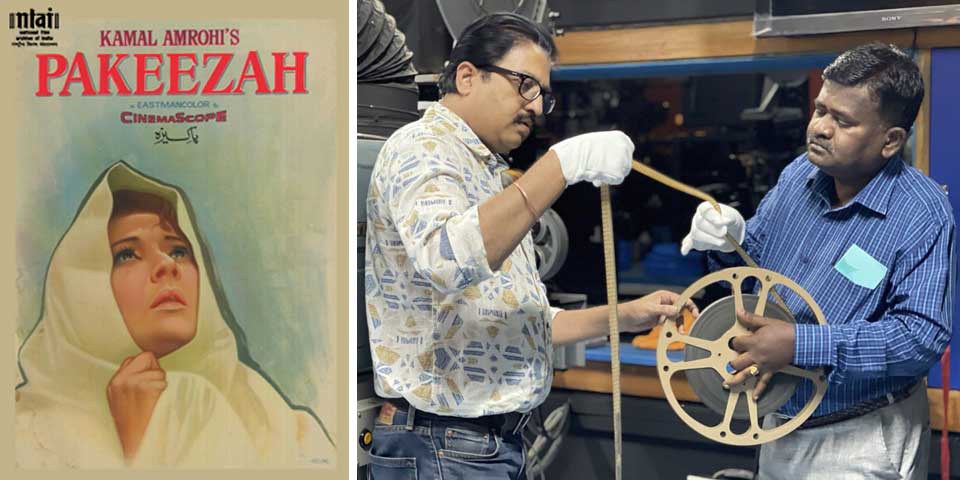 As film lovers remember renowned actress Meena Kumari today on her death anniversary (31st March), we are delighted to add rare 18-minute footage in 16mm of the making of Kamal Amrohi’s iconic film Pakeezah titled “Pakeezah – Rang Barang” in our collection. The footage has rare visuals of the 15-year long journey of Pakeezah, from its inception to release.

The highlight is the visuals of the popular song ‘Inhin Logon Ne’ shot in black and white in the early period of the shooting of the film, in which young Meena Kumari is seen dancing to a differently choreographed sequence. As per visuals, this was one of the first sequences to be shot and the clapper board shows the date as 16th July 1956.

The footage also contains a Mohammed Rafi Qawwali number ‘Jaye Toh Jaye Kaha, ab Ye Tera Deewana’, which was not included in the released film. The other visuals have the scenes of the premiere of the film held at Maratha Mandir in Bombay on 4th February 1972.

“This is a very rare addition to the NFAI collection. The preliminary inspection reveals the condition of the film is heavily scratched and colour faded. We are trying our best to salvage the material so that it can be made accessible to the audience”, said Prakash Magdum, Director, NFAI.