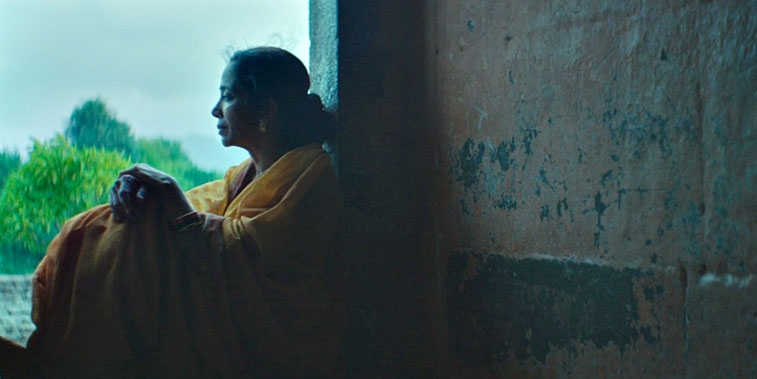 A feel of loneliness and emptiness is created in the opening image of Arpita Pattanaik’s Mannat. Color threads are wrapped on a sacred wishing tree. The next image is that of an ancient old tree standing alone in a wide field. These visuals along with their accompanying background sound and music express the title of the film—mannat (lit., worshiping God to achieve something).

The camera then moves from the wide natural outdoor settings to an indoor one. A middle-aged man is enjoying his evening drink. A woman (Mandakini Goswami) in her late forties enters the frame and prays before the altar. It can be read from her physical expression that she intensely wishes for something particular from her god (mannat). Moments later, she throws herself on the man, but just as the lovemaking is about to begin, he touches an amulet tied around her waist, and the entire mood of the characters and scenario change. The irritated husband scolds her and with that minimum dialogue, the audience is informed that the couple have a problem and that the man is displeased at his wife’s blind belief. The dialogues reveal the unspoken intentions of the wife’s prayer in front of a picture of the child Krishna.

Employing minimalist acting, Mandakini demonstrates feelings of desire, longing, and the loneliness of a childless woman. Her character’s aggressive mood for physical relation, rituals before the tree, and the brief sequences outlined above express agony and inner turmoil.

The cinematographer brings to the canvas the required mood of depression. The use of long shots creates a physical structure of the inherent loneliness.

While the longing of a mother for a child of her own is the dominating concept, Mannat goes on to offer the protagonist an alternate way of attaining pleasure and satisfaction. The director makes up for lack of attention to characterization by telling her story sensitively. She beautifully establishes the motivating theme within minimum time and space, utilizing cinematic elements with skill to enhance the sense of anticipation in the narrative. The linear, simple-yet-inquisitive opening establishes the intention of the principal character in physically-texted visuals. The aggressive spirit of the scene is intensified by the color of the protagonist’s dress—red.